How does a sunblock work?

This is a question that I got very often during the summer. A sunblock can have two types of active ingredients: organic and inorganic chemicals, which reflect or scatter the light away so that it doesn’t reach the skin at all. The most common ingredients of a sunblock are zinc oxide or titanium oxide. You can usually tell who is using a sunblock just by looking, because the sunblock whites out the skin. Sort of.. like this: 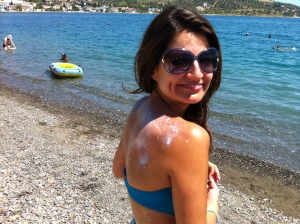 Sunblocks are usually white because of the large amount of titanium dioxide that reflect UV light.

Titanium dioxide (TiO2) is a white powder that has strong UV light absorbing capabilities. This property enhances TiO2 stability and enables it to protect the skin from ultraviolet light. Sunscreens designed for infants or people with sensitive skin are often based on titanium dioxide, as these mineral UV blockers are believed to cause less skin irritation than other UV absorbing chemicals. The titanium dioxide particles used in sunscreens have to be coated with silica or alumina, because titanium dioxide creates radicals in the photocatalytic reaction. These radicals are carcinogenic, and could damage the skin.

In newer formulations of sunscreens, TiO2 is combined with oil and is made up from smaller TiO2 particles (sized 40-50nm called nanoparticles). The oil in a sunscreen formula helps wet TiO2 and gives the optical effect of transparency so that you don’t have to look like someone’s painted you white.

For those who are wondering about the organic ingredients, these work primarily by absorbing UV light and dissipating it as heat. One of the most common organic molecules used in sunscreens is para-aminobenzoic acid, also know as PABA. The mechanism which allows PABA to absorb UV radiation is due to the resonance of the molecule. Resonance can be explained by saying that many molecules have more than one possible way in which the valence electrons could be placed. These electrons move freely across many nuclei. In PABA, a carbonyl group, a functional group where a carbon is double bonded to oxygen, can produce resonance by moving the valence electrons. The shift or movement of the electrons closely matches the frequency of UVB light, absorbing the light energy and releasing it as heat and or longer wavelengths of light. Source: http://www.sas.upenn.edu/~rosema/sunscreenchemistry.html

The portion of the sunlight that is filtered or blocked is ultraviolet radiation. There are three regions of ultraviolet light.

Sun is good for you, too

Although the sun can cause many aliments, UV rays are extremely important to a healthy functioning body. Vitamin D, which can not be produced by the body, is synthesized by the photolysis of a steroid in the deep epidermis of the skin. Without the exposure to natural light, the biochemical mechanism will not pursue causing disorders in both children and adults including rickets, ostomalaica, and osteoporosis.

For more info check this link.

Back to my alma mater

Yesterday, I travelled to my alma mater, Universitaet Heidelberg, to be part of the celebrations for the University’s 625th anniversary. When I arrived in Heidelberg, I realized that I was celebrating my own anniversary as well: ten years in science. Ten years since I first landed in Heidelberg to start my doctoral studies. These years in science and my Doktorvater’s blog inspired me to start my own blog today and write about my life and the science which is everywhere: chemistry.